Getting insight
you never had before

Employ a system that keeps eyes on your technology, tracks its every divergence, reveals correlation of data, provides you with immediate security messages…

… lowers need of regular preventive maintenance and reduces operating costs – and does that all the time for you!

Monitoring and control system is a web-based system for remote monitoring of power plants with a possibility of control it. It displays the course of variables and signals (including control signals), archives them and displays them in practical graphs and in a manager cockpit. It provides tools for discovering the cause of possible power plant malfunctions. It immediately reports breaching of safe intervals for each signal.

Why should you get our monitoring and control system

We guarantee to display the real data without the possibility of altering them in any way.​

Technical overview of signals and variables

Export feature for all data for further analysis and independent audit

Commands are validated before performing.

Possibility to define safe and warning interval for values of each signal/variable.

Different actions can be defined when signal/variable falls out of safe or warning intervals (display notification, e-mail, SMS etc.)

When a value of signal/variable falls outside predefined interval, even for a short time, this event will be logged and operator's acknowledgment will be required.

How have we prevented a significant loss of profit caused by non-production:

More than half towers of a wind park were unexpectedly shutdown during regular operation. During the investigation, supplier of the wind park stated that the shutdown was caused by the control system which identified risk of frost – it posed a threat to the surrounding environment and possibility of injuring nearby people by falling ice from the blades. Interesting fact was, that not all towers were shut down, but only part of them. Supplier tried to explain this by varying meteorological conditions at different towers – air thermic, elevation etc.

However, KEYSYSTEM – monitoring and control system showed that the towers that were stopped had a higher temperature of oil in their gearboxes than in the other towers. The wind park owner then asked the supplier whether the shutdown was not caused by this, even though the temperature was still in the safe limits. Power plant owner then also realized that the supplier performed firmware update on the towers that were stopped, but not on the others. By analyzing further data, the supplier came to the conclusion that the new firmware was faulty – it evaluated certain conditions wrong and set the turbine propellers angle of attack sub-optimally, leading to an increased temperature and safety shutdown. Due to fast intervention of KEYSYSTEM, it was possible to fix incorrect parameters and start the whole power plant in short time. 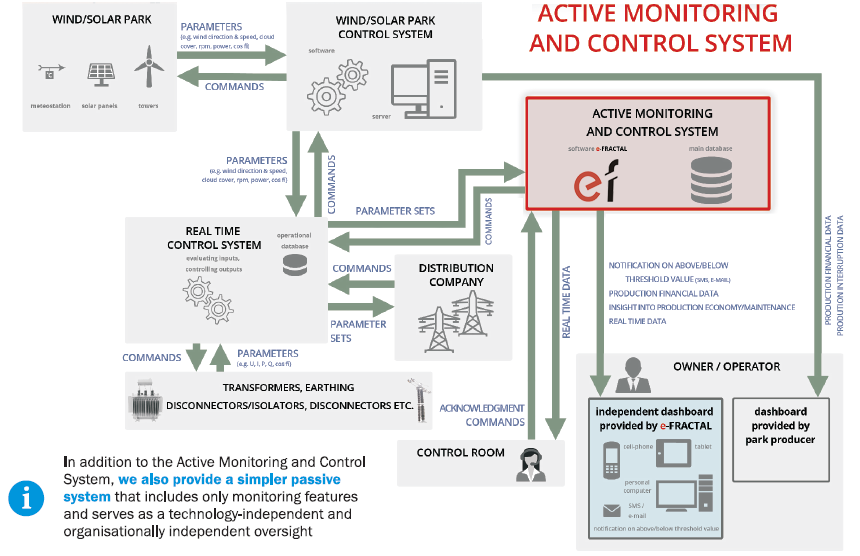 How we saved client's money and the investment into the monitoring system returned before it was deployed into production operation?

Our monitoring and control system was deployed during the testing phase of our client’s power plant to monitor signals and variables of the wind towers as they were put into operation. The system was launched into test operation to collect and store data, track trends and observe above- and below-threshold values requiring operators’ acknowledgment.

After a month of running in test mode, the distributor of electrical energy refused to pay for energy delivered during three consecutive days, explaining that the power plant did not supply any electricity into the distribution network. Power plant owner contacted the wind park supplier (a foreign company) as well as the control operators. Supplier confirmed that the power plant was delivering electricity. But the operator did not have all systems set up yet, so he did not have sufficient proof. Thanks to analysis of KEYSYSTEM – Monitoring and Control system it was obvious that the wind turbines were turning, data from gearboxes reported nominal parameters, measuring points of electrical generators did not show any anomalies and the current was flowing through block transformers. However, the system recorded a few short successive downtimes followed by one long downtime of the data bus in the substation that was, among others, connected to the distribution network. Time of those downtimes correlated to the time in which the distributor claimed non-production. After further analysis the data was provided to the distributor who after some time accepted the complaint and fully reimbursed the owner of the power plant.

Want to know more about our product?

We will provide consultation free of charge for building your own surveillance of your power units.

You can find out more about which cookies we are using or switch them off in settings.

This website uses cookies so that we can provide you with the best user experience possible. Cookie information is stored in your browser and performs functions such as recognising you when you return to our website and helping our team to understand which sections of the website you find most interesting and useful.

Strictly Necessary Cookie should be enabled at all times so that we can save your preferences for cookie settings.